– Why should I use Twitter for marketing in Japan?
– Why is it important to research the target audience?
– Who is your target audience?
– About the importance of keyword research and market research
– Step 1: Researching the maximal amount of traffic using market research and keyword research
– Step 2: Finding a bigger Twitter account with a similar audience
– Step 3: Following active Twitter accounts with high engagement
– How to reach a high engagement rate on Twitter?
– Why is it important to introduce yourself in the beginning to your followers on Twitter?
– How to win friends on Twitter?
– What should I tweet about on Twitter?
– How do I know what to write about on Twitter so that my target audience will like me?
– Why is it useful to reply to comments in the beginning
– What happens if your Twitter goes viral?
– What kind of tweets will get viral?

Why should I use Twitter for marketing in Japan?

Social media marketing is cheap it’s a free form of advertisement there are many different mediums, but I recommend using Twitter if you want to reach the Japanese audience. Japanese are shy, so they don’t want to share personal information. Twitter has the benefit of using a nickname and using a different photo for your profile, compared to Instagram you can also use links sending traffic directly to your homepage.

Why is it important to research the target audience?

It’s very important to think about the target audience before taking action. Before you do anything, you need to be clear about what you want to sell and what kind of people you need. It’s important to focus because you will waste time talking to people, who are not the ideal clients.

Who is your target audience?

Who are these people, what do they do, where do the work, where do they live, what kind of interest do they have, understanding your target audience is the most important aspect of building your audience. If you have a clear position and focus you can start adding people and of course, sometimes you can add people to Twitter which are not related to your main target audience, but I recommend building an audience on one topic.

Example: This is how I found my target audience

It sounds very confusing so I want to give you an example of what I did to build my Twitter audience. My goal was to sell a service teaching German online and also translating German and doing German interpretation for Japanese in Japan, so the market is very very small. My target audience is Japanese, they want to learn German and it makes sense that Japanese, who want to learn German don’t use the German language. They use the Japanese language and search in Japanese for keywords such as German or learning German.

About the importance of keyword research and market research

As a marketer, you can research the amount of traffic and keywords for free. I recommend Ubersuggest, but google analytics is fine too. Your market needs to be ideal high demand and low rivals. But, that‘s difficult to find, so just find a good market with a bit of demand and a bit lower rivals. Ideal you like your market very much because it will take time to, build a following there.

This is Ubersuggest. It’s free. For the keyword, German 49500 people search every month on Google, but the competition level is low.

For the keyword, Germany 110000 people search every month in Japan. It‘s also a market with less competition. 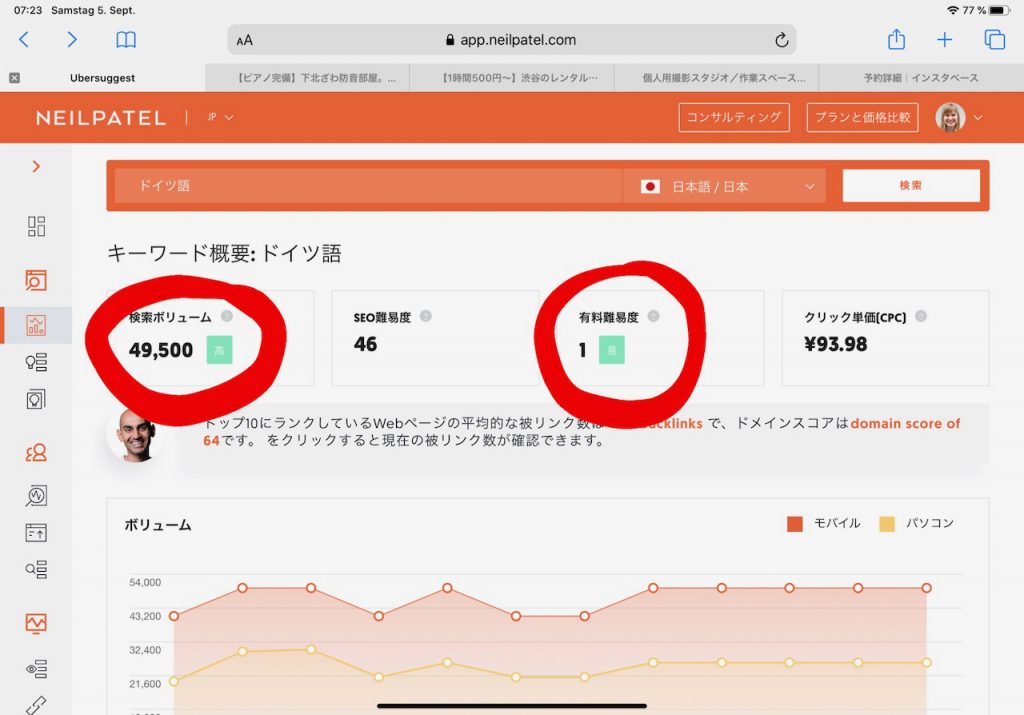 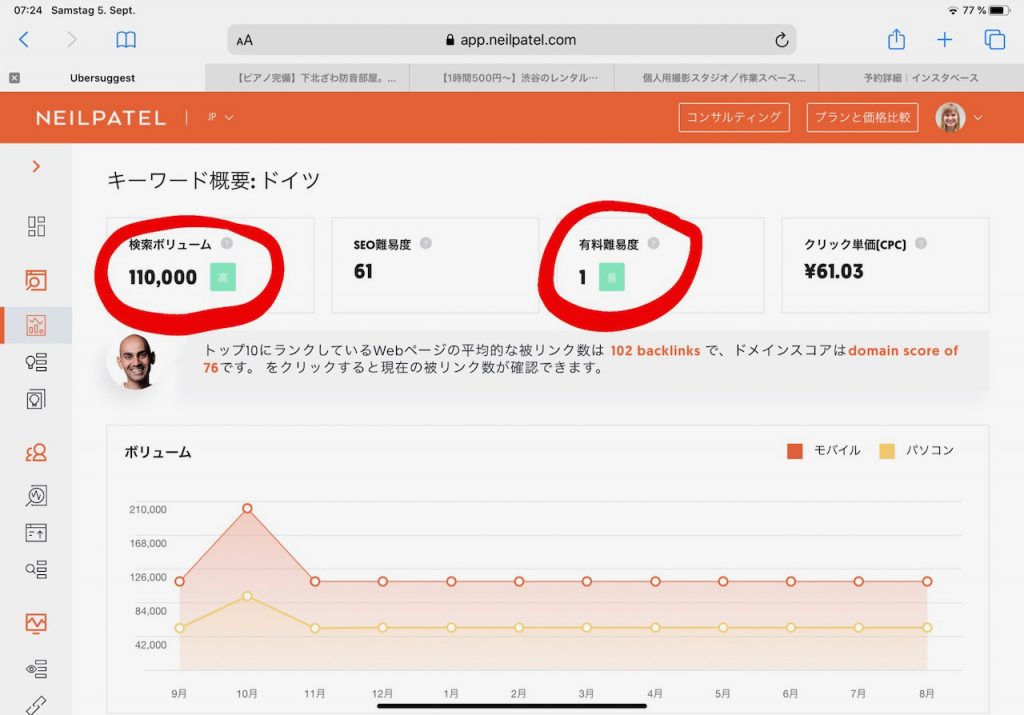 A big twitter account on a similar topic will help you to gain a small fan base fast.

Using Twitter to find your target audience is very easy because you can search by keywords. I search in Japanese for keywords such as learning German. I found that the German embassy in Japan has one of the largest Twitter accounts, which are related to Germany. Not everyone following this account is particularly interested in learning German, but most of them are interested in German politics, travel to Germany, and German culture. It‘s a beginning, people who are following accounts, which are related to Germany are very likely to become potential customers. So on Twitter following everyone, who seems to be your potential customer is a big part of getting your Twitter out there. 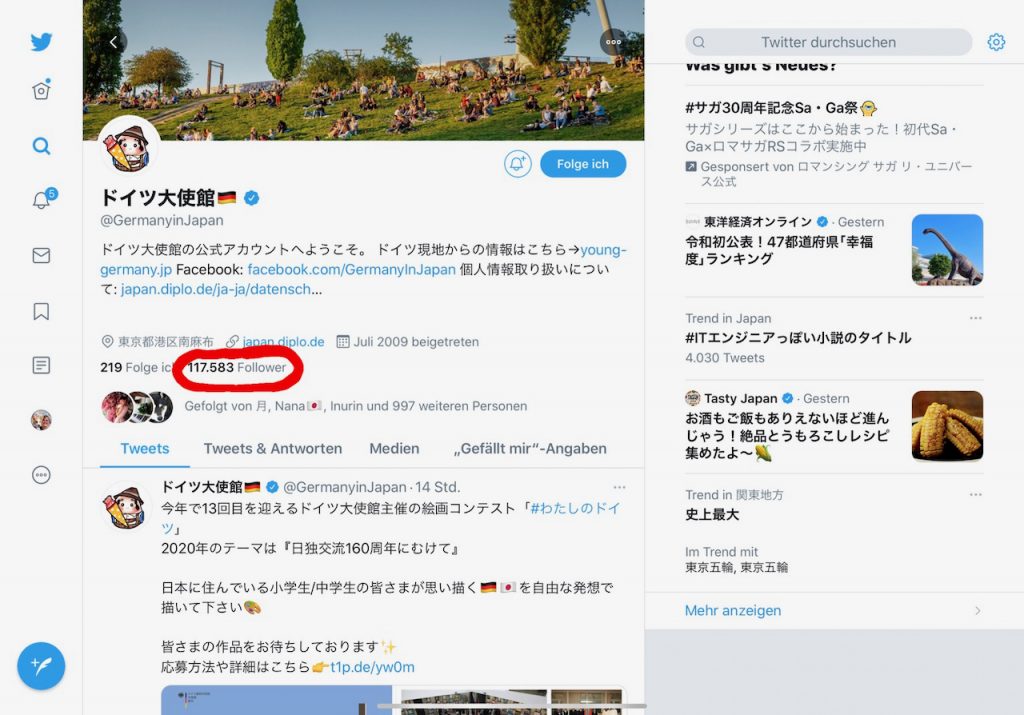 You can not get bigger in the beginning, if you just follow. Many people do this mistake they follow the followers of big Twitter accounts. You have to follow the people, who are commenting on a tweet that was sent within 30 minutes because that means someone was checking their phones 30 minutes ago and was researching about Germany. For this person, the tweet was so highly interesting that they commented. The possibility of being interested in your content is higher if they’re active. 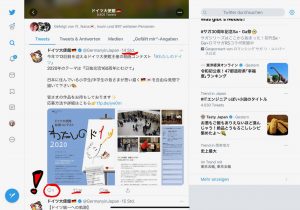 How to reach a high engagement rate on Twitter?

To get a high engagement rate, you need to find engaging fans at first. Active fans on big sites will be active on your site, too.

People will comment are going to comment on your tweets to so that means even in the beginning if you don’t have any followers you were stopped to get and some engagement people will reply to your messages so you will be very happy and keep writing Twitter will make it very very easy for you of course even if you don’t see anyone commenting or anyone liking you can continue if you have a strong will but people writing, and the people liking it makes it easier so in the beginning just follow people will comment a lot and then you’ll get people was your comment to your tweets tweets

Why is it important to introduce yourself in the beginning to your followers on Twitter?

If they don’t know you they will not be your friend but if you introduce yourself they are more interested in becoming your friend.

It will be very very stressful to write the introduction run hundred times a day, so I recommend just make a cute introduction and copy-pasted everyone you’re interested in just introduce yourself do not sell stuff just be nice. Set yourself a small goal of reaching out to people every day, for example, 10 people/day. You can also contact 100 people a day, but you will get tired and quit soon. Further, sometimes there is a limit on Twitter, so you can wait and keep sending messages again.

You have to be patient, no one is going to be interested in you. Humans are most interested in themselves, that is human nature so to get people interested, you need to make them feel welcome, happy, and enjoy your company.

There are many blogs about how to write a good Twitter content and it’s very useful them. In the beginning, you need to completely understand the Twitter medium, because there’s a limit on how much you can write, your goal should be done you use this limit. There are other ways, you can use a picture, you can make a small video, or using a cute gif. It‘s always better to make the most of your content, if you keep posting writing a lot every time it can be very stressful, but in the beginning, you need to understand how to optimize your content the best.

How do I know what to write about on Twitter so that my target audience will like me?

You cannot decide if the audience is going to like your content or not, but what you can do is to aim to make a high-quality, so how to make high-quality content it needs to be contained around your target the keywords always keep in mind your goal is to find people were interested in buying your services. It can be very hard to just stick to one topic and write about it for a long time, but in the beginning people, I’m not going to remember much anyway. Aim to make them feel very happy and welcome, then second interested in your keywords.

Why is it useful to reply to comments in the beginning

If someone talks to you, but you ignore them. You will feel sad, so every time someone talks to you, they will be happy, if you replied. After reach more than 2500 followers on Twitter you become very stressful for me to reply to comments, so I started to only like if people commenting and they become interesting because since I cross the 7500 followers people are starting to kind of engage with themselves within the comment section of Twitter so you can see like it started a discussion so it’s kind of fun so if you write something people are going to reply and they’re going to talk to each other. At that point of course it’s nice if you reply from time to time but the people just enjoy talking with you in the community so even if you just don’t have the time and like it and they will be happy and feel appreciated as well.

Although the viral tweet will usually last around three days to a week. You’ll see it because the number of likes keeps growing and the number of people commenting keeps getting bigger. To drive more traffic, what you can do is to actively reply to every comment so, if you have 300 people are commenting it will take a lot of time to reply, but replying to 300 people will on him automatically make your tweet more engaged and Twitter is going to promote is much more. On the other hand, if your tweet got viral people will start promoting their businesses or a link to their services and sales staff, so you have to take the time to delete everyone, who is spamming your viral tweet because this kind of spammers is bad for the balance of your comments.

What kind of tweets will get viral?

Getting a treat viral happened to me a few times: the first time I was choosing a very beautiful picture of a German landscape together with a tweet. The second time I was writing a story introducing myself to how I learned Japanese. Then one time I was talking about emotions and the people got sympathy.

I recommend searching Twitter for News and topics which many people already interested in you’ll never be sure which tweet is going to get big, but you can search for trends using the Twitter search function.